I made this last week for our Wednesday morning Bible Study group. 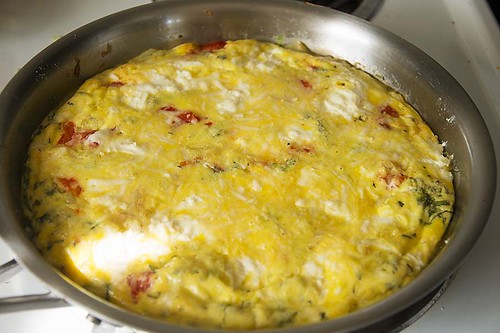 Rich with ricotta and pecorino romano cheese, and a little tang from the roasted red bell peppers, it was well received. 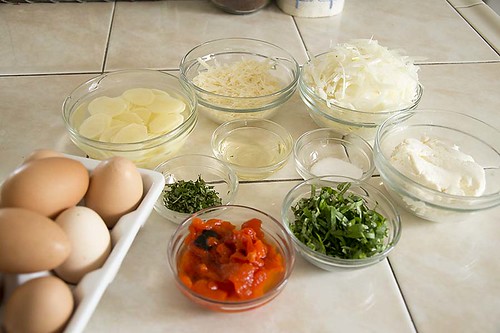 The recipe calls for parsley but I thought that fresh basil would be better, and I was right.
Stack the basil leaves from the largest to the smallest, and roll them up like a cigar,

then chiffonade. Also strip oregano leaves off the stems. 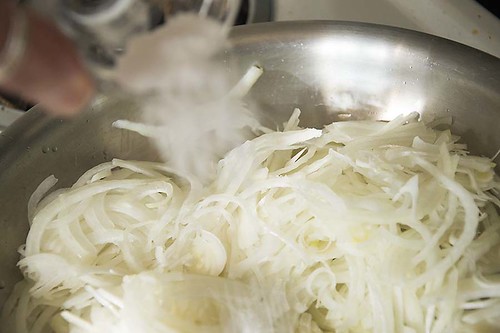 Heat the oil in a skillet and add the onion, potato and salt, and cook until lightly browned and soft.

While the potatoes and onions are cooking, whisk the eggs and add part of the pecorino romano cheese and the basil,

salt, and the oregano

add the egg mixture to the onions and potatoes in the skillet, mix well.

Add dollops of the ricotta cheese and sprinkle on the remaining pecorino romano.

Hot out of the oven.

It's a good thing our Bible study group is a casual gathering because I had to serve it right from the skillet. I didn't have a non-stick oven proof skillet at the time (I do now ;-) Nevertheless, it was delicious and everyone enjoyed it.

1. Arrange a rack in the middle of the oven and heat oven to 425°F.
In a large bowl, whisk together ¼ cup of the Pecorino, the parsley, ½ tsp. salt, oregano, and eggs and season with black pepper.
Set the egg mixture aside.
2. Heat the oil in a 10-inch nonstick ovenproof skillet over medium-high heat. Add the remaining salt and the onions and potatoes
and cook, stirring occasionally, until lightly browned and soft, about 20 minutes.
3. Remove the skillet from the heat. Add the egg mixture to the skillet and stir to distribute the onions and potatoes evenly.
Scatter the peppers over the top, spoon the ricotta over the mixture in 6 dollops, and sprinkle with the remaining Pecorino.
Bake until the frittata is lightly browned on top and the center is set, about 15 minutes.
Run a rubber spatula around the edges of the frittata to loosen it, then slide it onto a serving plate.
Season with more black pepper, if you like, cut into wedges, and serve.
Serves 4–6

Main-course frittatas like this one are popular in the southern Italian region of Calabria, where traditional sheep farming is an
enduring way of life and freshly made sheep’s milk ricotta is an everyday pleasure.
Calabrians sometimes add sliced cured sausage to this ricotta frittata on Easter, to celebrate the end of the Lenten fast.

I made this last week for our Wednesday morning Bible Study group.

Rich with ricotta and pecorino romano cheese, and a little tang from the roasted red bell peppers, it was well received.