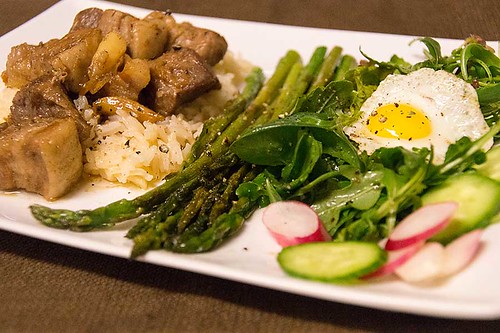 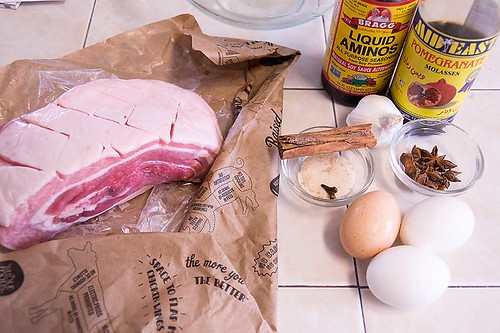 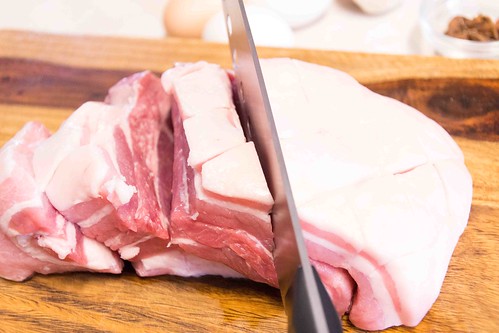 It was nice of the butcher to score the fat cap, which provided me with some nice guidelines for cutting the meat into cubes. 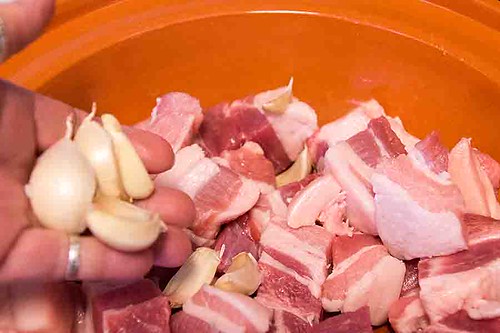 Put the pork into the pot and add the cloves of garlic. The recipe calls for using a clay pot if you have one; I used my tagine; if not, a regular pot is just fine.

Add the thick soy sauce, the light soy sauce and the water.

Add the cinnamon, star anise and a pinch of red pepper flakes.
I decided to add the pepper flakes later, that's why they aren't in the ingredients photo. 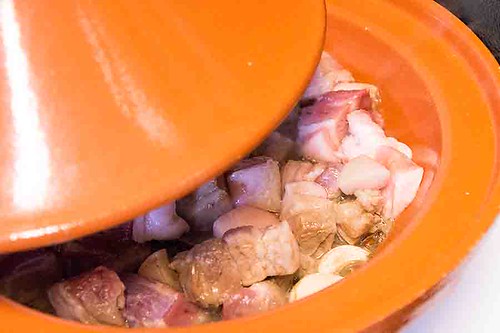 Turn the heat on high, and as soon as the pot is hot, reduce to medium, cover and simmer for about 20 minutes, and then, uncover and simmer until the meat is tender. Occasionally stir  so the meat will take on the color of the soy sauce.

Make sure you have a lot of rice at the ready.

I served it with fresh asparagus and a salad of spinach, pea shoots and arugula topped with a sunny side up quail egg.

I included all her comments and notes.

1  or other fat-marbled cuts of pork

you have one. Otherwise, use regular pot.)

3. Add the thick soy sauce and the light soy sauce (because I do eyeball, I

more than a third way up the meat).

4. Turn heat on to high and as soon as the pot is hot, turn to medium and

simmer, stirring occasionally to coat pork with soy sauce. When pork is

half done, maybe about 20 mins in, add a bit of water if sauce is getting

too dry. Don't overdo the water.

5. Add a piece of rock sugar (not too much at first and more to taste if

still not sweet enough) and also the eggs. Cover and simmer for another 20

mins or until pork is tender and eggs take on dark color of soy sauce.

1. You can also add some dried chilies in this dish to give it a spicy

2. My mom also used to add some sea cucumber to the dish. Give it a try if

you want. It’s harder to find sea cucumber here and expensive to boot so I

3. Sometimes I add firm tofu (taukwa) to the dish. The tofu soaks up all

the wonderful flavors from the sauce.

Serve and enjoy over rice. Lots of rice

belly pork). The fat in this cut makes this dish sing! That and the garlic

is key. Well, ok, the soy sauce is also quite crucial. But truly, that's

I want to say that when I make this dish, I tend to eyeball the seasonings.

The main flavor component is the saltiness of the soy sauce, but there

should be just enough sweetness to play a nice contrast to that saltiness.

The garlic also adds a depth of flavor that marries well with the pork.

Some people add cloves, star anise and cinnamon to the sauce but I find

that keeping it simple actually accentuates the garlic-porky-salty-sweet

flavors in tau yu bak. I leave that option open for those who'd like more

Also, we've always kept the skins on the garlic in this braise. I wasn't

sure why until this last time I made it when I did not keep the skin on.

into the sauce and the soy flavor is muddied a little. It's still

sauce and not overwhelm the whole dish. Also, keeping it whole in the skin