Cool crispy cucumbers in a slightly sweet, spicy sauce tossed with cilantro and peanuts.
Can be a side dish or appetizer. 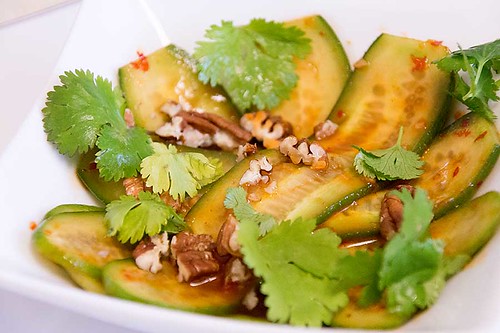 This is the second batch I’ve made in one day it’s that good. 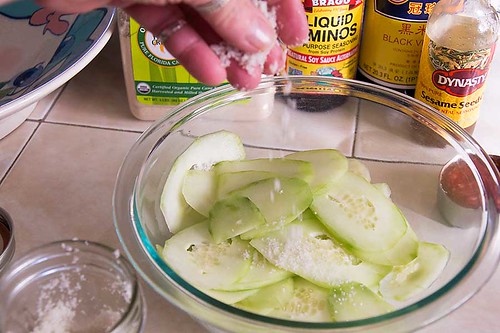 Slice the cucumbers into a medium bowl, toss with salt and let them sit while you are making the sauce. 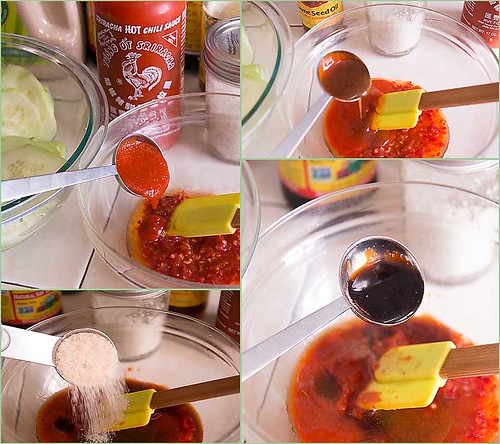 Never thought I’d need a bottle opener for a bottle of vinegar, but I did. Imagine my surprise when I went to open the black vinegar to find this. The vinegar was then added to the sauce
I found this at 99 Ranch Market 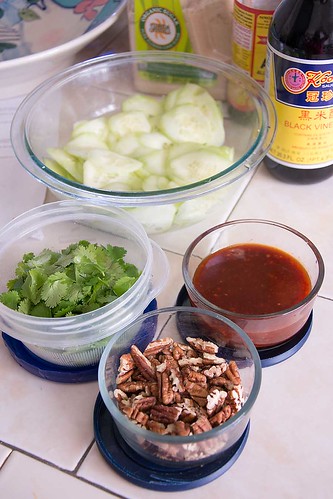 Since I was taking this to the Women’s Fellowship, I packed it up for transport.

The recipe called for peanuts but I used pecans which were good too.

Then of course, I forgot to take a photo once I got there and assembled the salad, not that I was too busy talking and carrying on with my friends or anything like that.

There was none leftover to bring home and I wanted some, so I made more.

I prefer the smaller cucumbers for this dish but the others are just fine too.

Here's the recipe I kinda followed.
Instead of all sambal oelek, I mixed half and half sambal oelek and sweet chili sauce. The only other change I made was using pecans rather than peanuts, only because I didn't have any peanuts at the time.

To start, toss the cucumbers with the salt and let site while you prepare the sauce.

To make the sauce, add the ingredients to a small bowl and whisk to combine.

To finish the dish, add the cucumbers to sauce and toss to evenly combine. At this point, the cucumbers can sit for 10 to 20 minutes at room temperature, or they can be served immediately.

Before serving the cucumbers, garnish them with the peanuts and fresh cilantro.

by Dawn T in Rouxbe Recipes

This bold and flavorful cucumber dish is made with a spicy, yet well balanced, hot sauce. It then tossed with fresh cilantro and roasted peanuts. Enjoy as a side dish or as an appetizer.

Cool crispy cucumbers in a slightly sweet, spicy sauce tossed with cilantro and peanuts.
Can be a side dish or appetizer.

This is the second batch I’ve made in one day it’s that good.