A strata like dish, but for this bread pudding you don't have to start the night before. This is perfect for last minute Nellies like me. 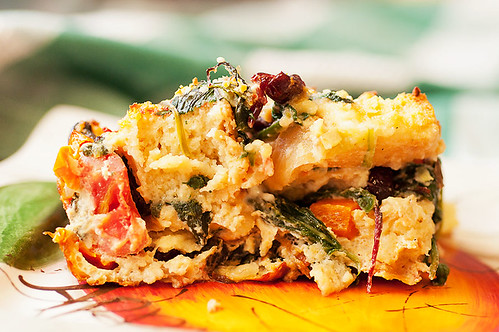 And to think, I ended up with this savory bread pudding because I had some leftover ButtermilkBiscuits. Lucky, lucky me.

Have any leftover bread and some veggies in the fridge? Let's get cookin' then.

These are the beauties that prompted this whole wonderful meal. 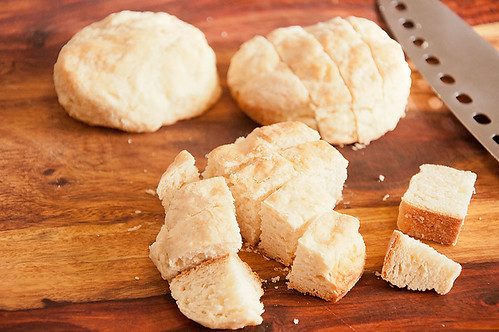 When I have leftover biscuits, I usually make an Eggs Benedict type breakfast, but this morning I wanted somthing a little different.

After doing a little research on savory bread puddings, this is what I came up with. 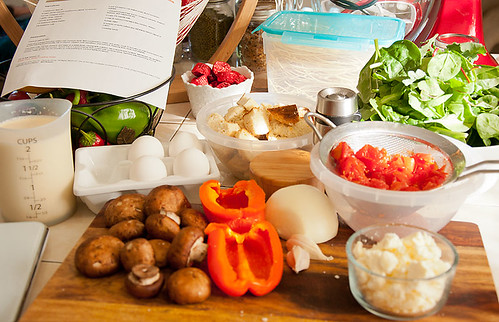 I think you could use any vegetable you might have in your fridge. This is a great recipe for using up some odds and ends vegetables; you know, the vegetables that you don't have enough of for a meal and that would typically be used in soup. 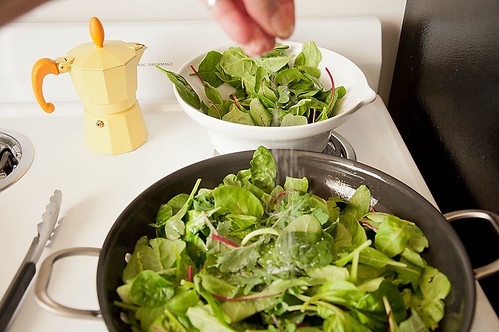 At the risk of making myself look rather foolish, am I the only one that didn't know that 10 ounces of fresh greens is not the same as 10 ounces of cooked greens!!

It's not like I've never cooked fresh greens before, that's all I use. Guess I just never gave it much thought, or ever had to weigh them before.

See that huge bowl of my greens mixture...

This is what it cooked down too. 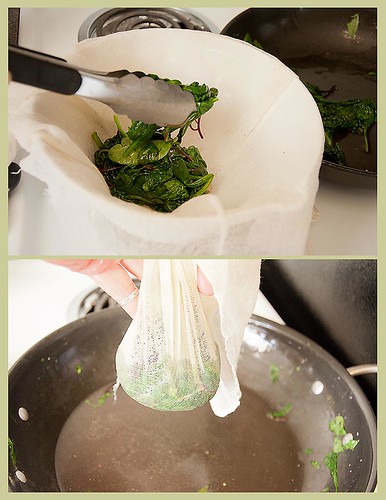 Put the cooked greens in a cheesecloth lined bowl. Lift the cheesecloth out and squeeze the beejeebers out of it, get all that excess water out. Ah-hah that's the weight difference. 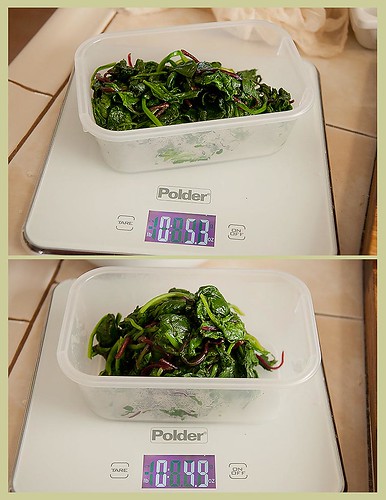 Knowing I had no where near 10 ounces of greens, (one recipe calls for a 10 oz pkg of frozen spinach) I loaded up the pan with more of the greens mixture and did it again, weighed it, and deemed it close enough. 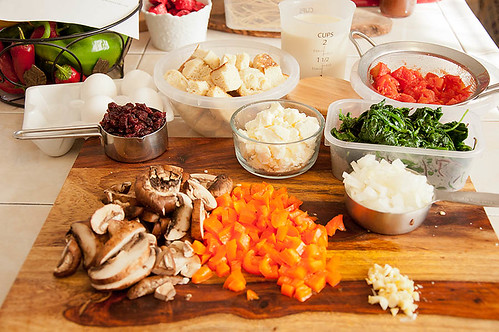 Now that all the prep work is done, we can get cooking. Oh yes, the craisins decided to show up for the photo shoot. 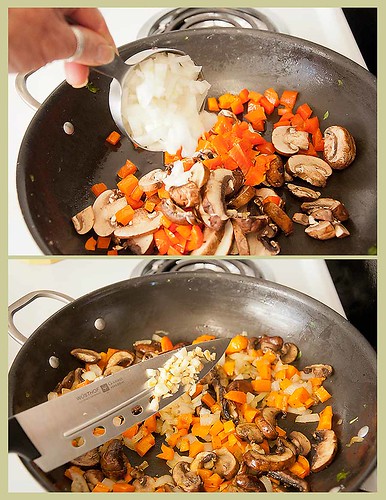 In a large skillet, add the mushrooms, bell pepper and onion, cook until they start to soften. Add the garlic and cook a few minutes more. I don't like adding the garlic too soon, it can get bitter if it's cooked too long. 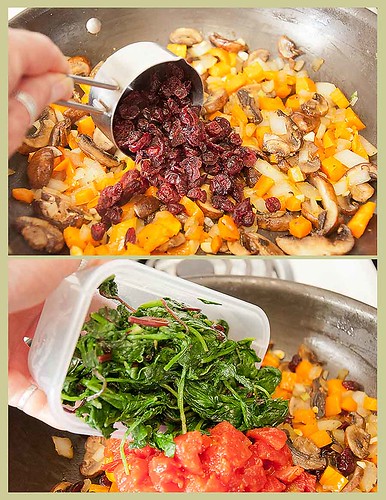 Add the craisins, tomatoes and spinach. 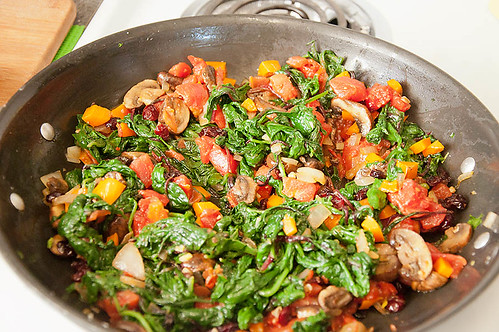 Give it a good stir and set aside to cool a little. 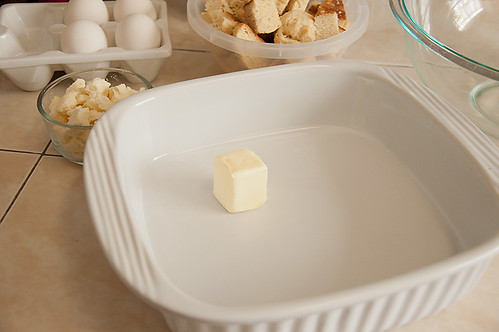 While the vegetable mixture is cooling, butter a 2 quart baking dish. 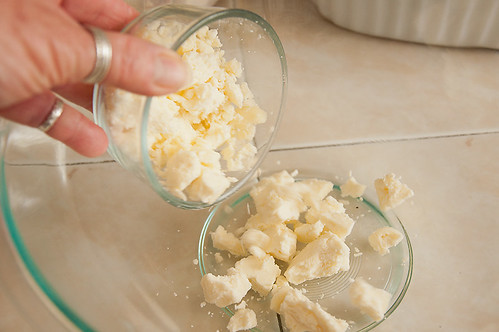 In a large bowl, add half the feta cheese. I broke up the chunks of cheese a bit more. 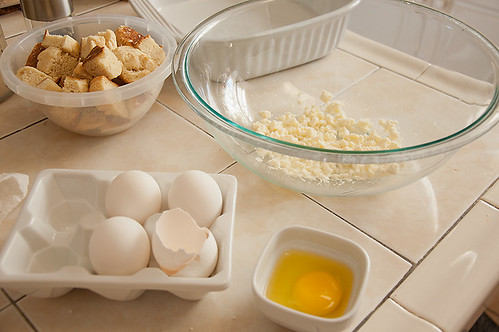 I like to crack the egg into a little cup before adding it to the rest of the ingredients, just in case I get some broken eggshell. I don't like going fishing for teensy bits of eggshell. Also, I use farm fresh eggs so I want to check my eggs for any surprises. 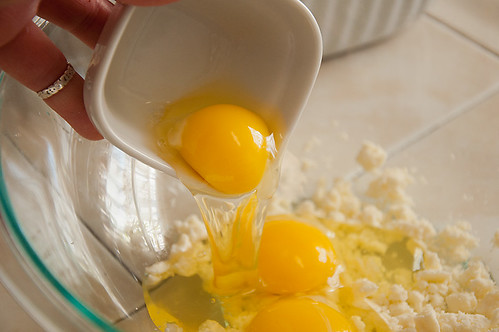 Now you can add the eggs. 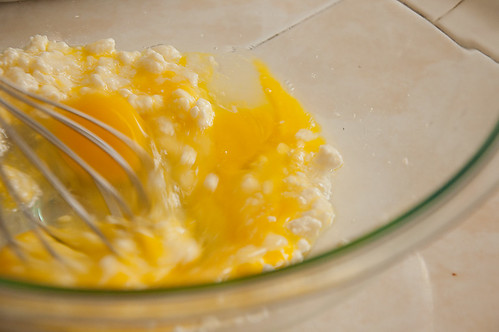 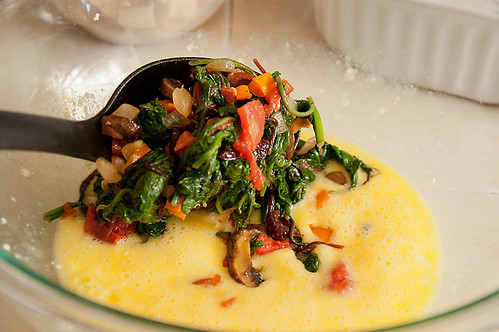 Now add the cooled vegetable mixture into the egg mixture. 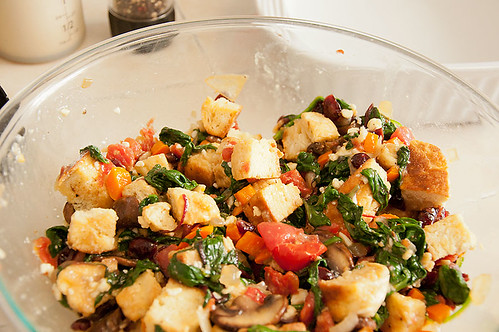 Then stir in the biscuit/bread cubes. 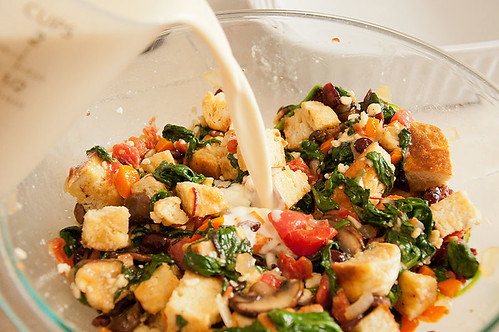 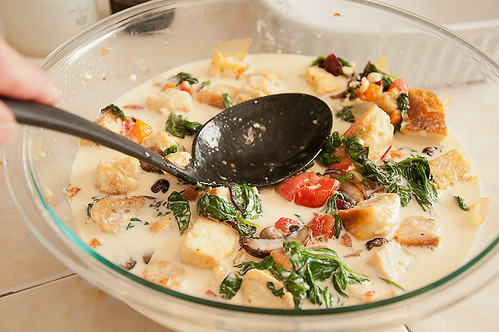 and press the bread down into the milk. 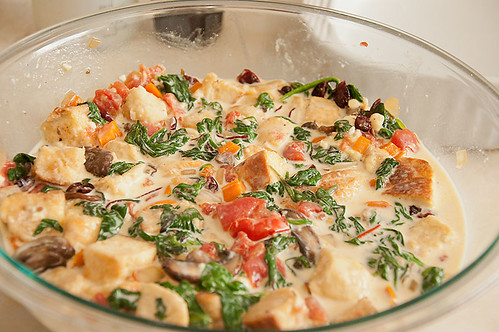 Let stand about 20 minutes, periodically pressing the bread down into the milk. 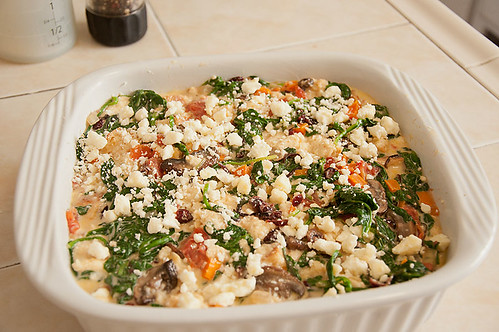 Spoon the mixture into the prepared baking dish and top with the rest of the cheese.

Place into a preheated 350* oven and bake for 45 minutes. 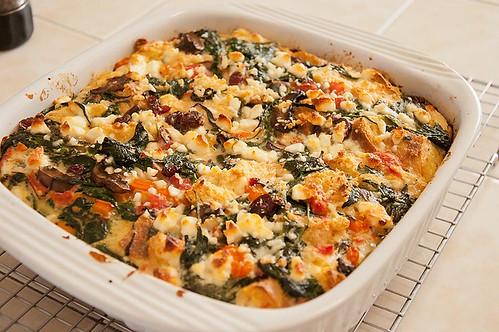 Hot out of the oven.

Be patient, let it sit for at least 10 minutes to re-absorb some of the liquid.

My take on a recipe from Cooking light Magazine.

A strata like dish, but for this bread pudding you don't have to start the night before. This is perfect for last minute Nellies like me.

And to think, I ended up with this savory bread pudding because I had some leftover ButtermilkBiscuits. Lucky, lucky me.

Have any leftover bread and some veggies in the fridge? Let's get cookin' then.