We bought some wonderful fresh veggies at the farmer's market in the morning. 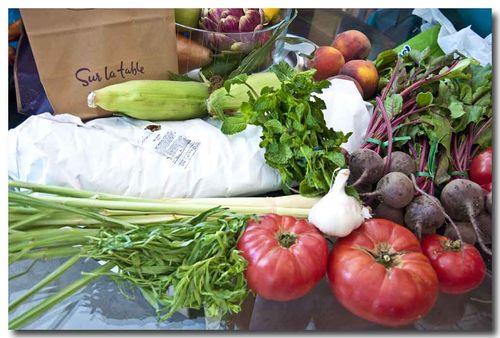 On our way back from the farmer's market we stopped by Su la table but I'll post about that later. It was a quick stop anyway as we had a "very pricey" piece of salmon in the car.

Come see what we did with our haul from the farmer's market.


The first order of business was to deal with the beautiful fresh beets (dirt chunks as our foodie friend Barb Schaller calls them.)

They got a good scrubbing, 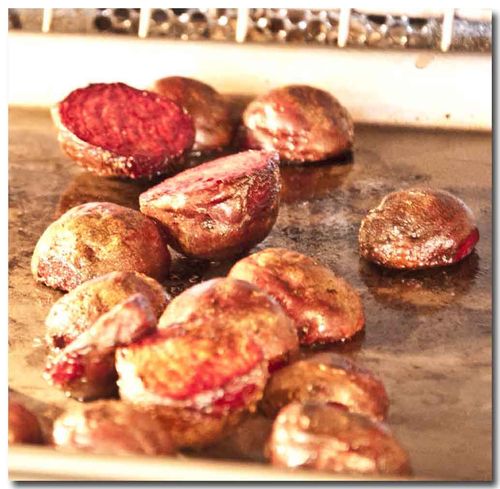 cut in half, then drizzled with some olive oil and salted and peppered and roasted until tender.

They were plated and drizzled with some browned butter infused with tarragon.

Wow, these were so good.

Lucky for us Christine bought a new cookbook at Su la table, I know, hard to believe, (Christine has over a thousand, yes, over a thousand cookbooks already) but lucky for us she bought another one and was thumbing through the pages on our way back to the house. She found an interesting looking recipe for the beets we bought at the farmer's market so Squeaks jetted by a supermarket and picked up the rest of the ingredients we needed to make it.

Oh mercy me, am I ever glad she made this dish.

Warm beet greens and stems with whipped feta. Oh, merciful heavens you have to try this. 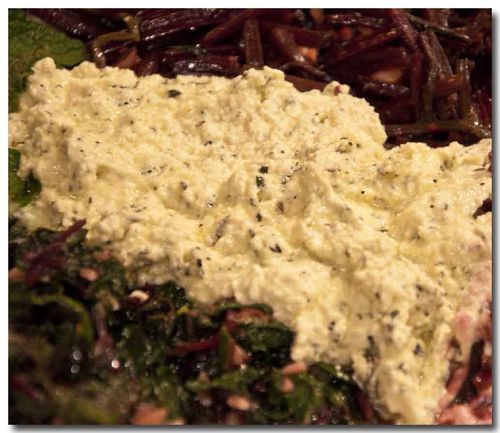 We noshed on this as the rest of the meal was being prepared.

I'm surprised there was enough left over for us to take some home. When I got home I made a pizza using the whipped feta cheese and topped that with some heirloom tomatoes and fresh basil from the farmers market, what a treat. I'm making the whipped feta to put in so many different dishes, it's just wonderful. 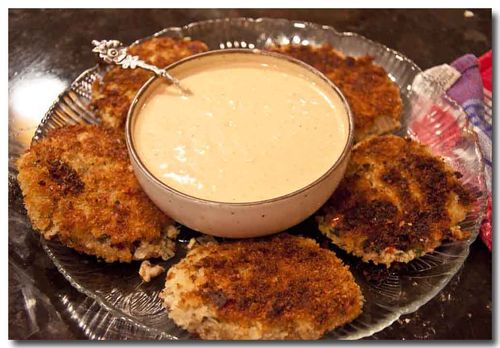 Christine made her famous and wonderful Peacakes. She hasn't put up the recipe yet, but when she does I'll post it. They are truly delicious and I ate more than my fair share of them. 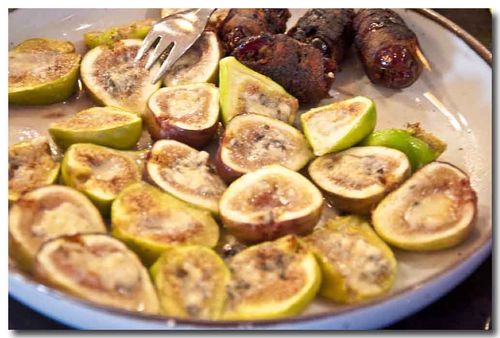 We heated up some of the chorizo thingies I made Fri night and I also topped some fig halves with Gorgonzola cheese and placed them under the broiler until nice and bubbly. 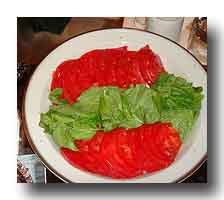 The heirloom tomatoes were served very simply to show off their natural deliciousness. We just tore up some fresh basil and topped them with marinated mozzarella. The marinade from the mozzarella was then drizzled over it. 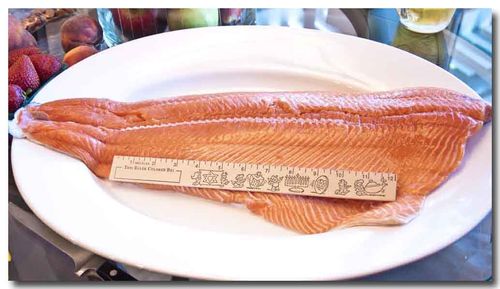 See this beautiful piece of salmon loveliness, I can't remember when I've  had better salmon.

So, after looking at this glorious piece of salmon, I'm sure you can understand my one second of apprehension when Squeak's stated that she was going to make a fish BBQ sauce for it.

Had I not already known her good taste and cooking ability I would have screeched and passed out on the kitchen floor. 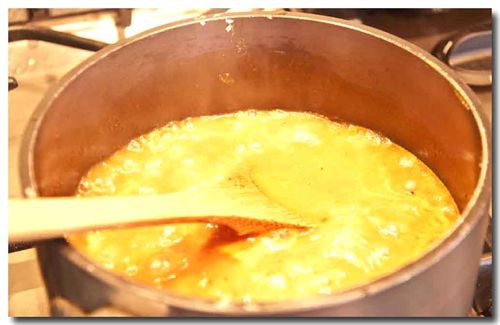 I wish the photo was better, it doesn't do this beautiful sauce justice.

Squeaks says it's good on all fish but is really great on grilled shrimp. (It's delicious right off the spoon too. ;-) 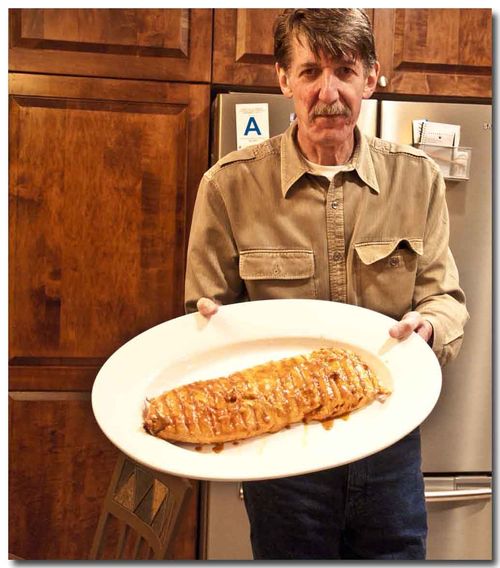 The Grill Meister strikes again. Did he do a great job or what.

I have to add that Bill is so nice and so patient. He had to contend with a house full of women for the weekend and he did it with such gentlemanliness. 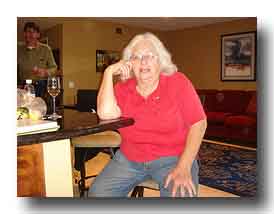 Harriet drove down from the L.A area and joined in the festivities. I think she and Bill were the only well behaved ones. 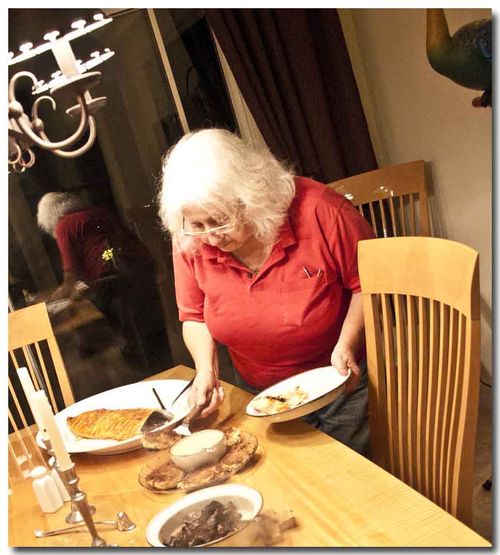 For dinner we had the beautiful salmon, roasted beets with the beet greens, corn on the cob, pea cakes, heirloom tomatoes with basil and mozzarella.

Harriet was nice enough to bring us carrot cake for dessert. Yummeeeeee

I feel like I am forgetting something, please accept my apologies if I did. There was just so much fun and cooking going on it is hard to remember it all.

All I really know is that I had the time of my life. 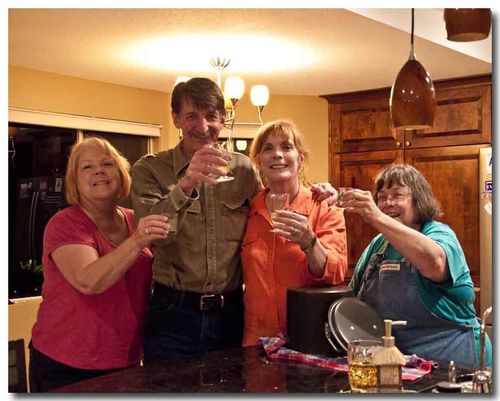 Here's to you, thanks for having fun along with us.

Until the next time 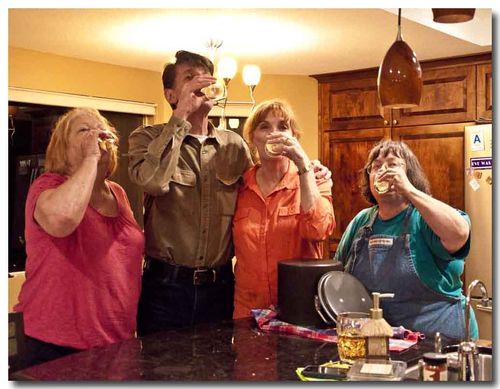 limp. Combine with all ingredients and simmer 10 - 15 mins.

Very nice with delcate fish such as salmon and mahi mahi.

Separate the beet leaves from the stems. Cut the stems into 1-inch lengths.

Bring a large pot of salted water to a boil over high heat. Add the greens

and boil until tender, about 3 minutes. Transfer them with tongs to a sieve

or colander and run under cold running water to stop the cooking. Drain

Add the beat stems to the boiling water and cook until tender, 3 to 5

minutes. Drain in sieve or colander and run under cold running water to

Heat 2 tablespoons of the olive oil in a medium skillet over moderate heat.

Add 1 tablespoon of the garlic and saute until fragrant, about 1 minute.

Add the beet greens, season with salt and cook, stirring, until hot

throughout. Transfer to a bowl. Add lemon juice to taste and let cool until

In the same skillet, heat the remaining 2 tablespoons olive oil over

fragrant, about 1 minute. Add the beet stems, season with salt and cook,

stirring, until hot throughout. Transfer to a bowl. Add lemon juice to

taste and let cool until warm.

1 tablespoon olive oil in a small food processor and puree until smooth,

Arrange the beet greens on one end of a serving platter. Put the beet stems

on the other end and the whipped feta in the middle. Serve immediately.

We bought some wonderful fresh veggies at the farmer's market in the morning.

On our way back from the farmer's market we stopped by Su la table but I'll post about that later. It was a quick stop anyway as we had a "very pricey" piece of salmon in the car.

Come see what we did with our haul from the farmer's market.