The day after Stan borrowed my car to go to his Dr's appointment in town, I noticed a scrape on the rear bumper. "DANG !!! man, what did you do to my car?????," (I'm paraphrasing what I actually said, after all, this is a family oriented blog.) He swore up and down he didn't do it and had no knowledge of it, yeah right, it looks exactly like the type of damage that would happen in the parking lot of a Dr's office. 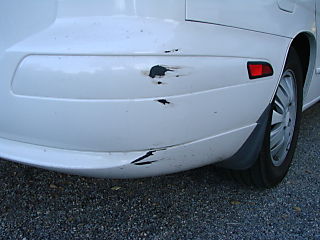 Fast forward a few days. I come home from work and as usual I back my car down into the driveway. For some weird reason I challenge myself to park the car as close as I can to the fence, in one shot, and not hit the fence. 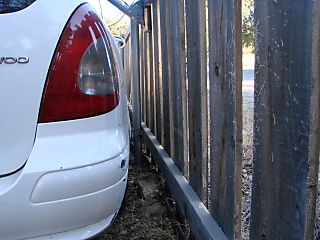 Then it hits me OOOPS !!!! I check out the fence. Dang, white paint, scraped wood, matches up. 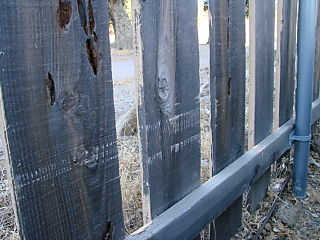 Good thing Stan doesn't know how to use a computer.

There's nothing like sitting in the dentist's chair for 2 hours, late in the day, on an almost empty stomach. By the time the dentist was finished having her fun with me I was tired, numb and hungry. Stan offered to take me out for dinner, but with half of a numb face, which of course would have made me a charming dinner companion, (dang, maybe he wanted to watch me try and drink a glass of water, that would have had some entertainment value for sure ;-) that and the possibility of chewing off the inside of my unfeeling mouth, I passed on his generous offer. This is the point in the conversation where he usually tells me he was going to take me to my favorite expensive, or ethnic restaurant that he doesn't really care for. He doesn't know, even after all these years, who he's dealing with. Next time I'll take him up on it, eat two bites, and take the rest home to eat when I get my face back. <insert witchy cackle here>

I've been very hungry for a cold pasta salad, but not just any pasta, I had to have a bow tie pasta salad. I bought some organic vegetable bow ties last weekend and decided this was the perfect time to make it. It's easy to make, easy to chew. Now all I had to do was make it with what I had on hand, so here's what I did. 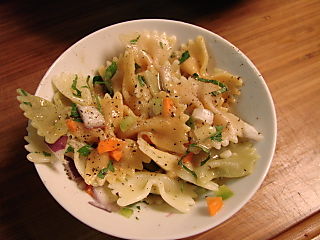 Do you have a junk drawer?

I've always had a junk drawer. I remember mom having one when we were kids. It's a place you put things, little odds and ends that have no other place to go. They don't belong in the bedroom, too small to put in the closet, too good to throw out, so what do you do with them? you put them in the junk drawer.
NO!! I am not throwing out a take a picture of your junk drawer challenge. Taking that picture of the inside of my refrigerator is as low as I'll go for my blog.

I've been playing with the categories section and wanted a new category for my ramblings ahem, miscellaneous posts. I was thinking of a category like,"The musings of a mad woman," "Not noteworthy notes" or some such clever titles that I'm sure are over used anyway. Then I got to thinking about my junk drawer, that's where I put my little treasures, things I need or want to keep but have no where else to put them.

So the new "The Junk Drawer" category is not a bad place to be, that means you are a keepsake, a little treasure. 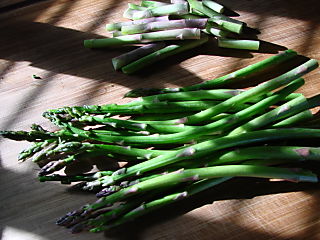 My favorite way to prepare fresh asparagus is to either grill, roast or broil it until golden brown. First I give it a toss in a little olive oil and a grinding of fresh black pepper and a sprinkling of salt mmmm

Here it is in the tanning booth. 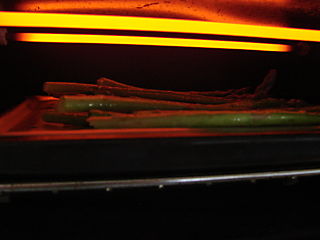 It actually was a little tanner than it looks here. 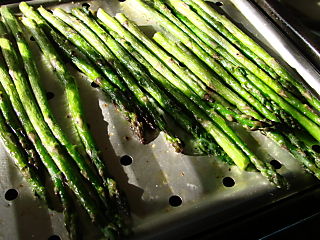 I could make a meal of just this.

Even though the day was cloudy I just had to go put my feet in the Pacific Ocean, and feel the cool ocean spray on my face.

Daughter Vicky suggested we go to Ocean Beach. Dang, I didn't know they had web cams all over the place. I hope I didn't do any inappropriate scratching  ;-)

First we stopped at South Beach Bar and Grill. It was packed as were all the places at the beach. We wormed our way through the crowd and found some seating out by the back patio. 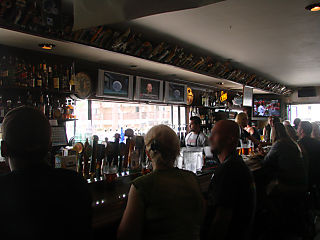 Come on in, the water's fine.

Not only to the Typepad engineers that fixed my blog, but to my fellow bloggers that helped and empathized with me.
I didn't realize how much this little blog meant to me until it was "ill"

Back to happy blogging.

Wahoooo!! I heard from Typepad support. Thank you, Thank you

For the first time I've received a response from Typepad support that I felt was not an automated response.

I think I'm finally seeing a light at the end of the tunnel. Thank you Brianna.

Here is the response I got.

I don't see any code discrepancies, and nothing that I've attempted has corrected the issue. I am going to forward this to our engineering team and see if they can find the underlying issue.

We appreciate your patience and hope to have this resolved for you soon.

Please let us know if there is anymore we can do to help.

My faith has been restored.

I'm sad and I'm bummed but I want to keep on blogging until I get this mess figured out.

I was in Trader Joe's last week and thought this looked interesting, and a nice change from the standard rice or pasta I usually make to accompany what ever I happened to make for dinner. The grains blend has Israeli style couscous, orzo, baby garbanzo beans and red quinoa. 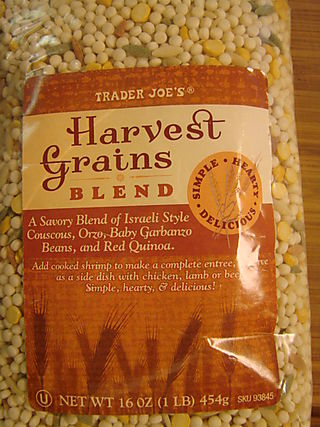 The grains are beautiful and have pieces of dried spinach and dried red bell pepper.

It feels so good I couldn't keep my hands off it. Good thing it had to be brought to the boil, a little sterilization there. 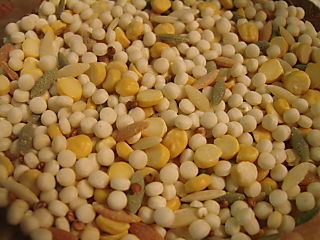 While I was at Trader Joe's I also bought some frozen salmon patties. A first for me, not the salmon patties, but frozen ones. I can make a pretty mean salmon patty but some nights I don't want to bother, for one very good reason or another.

While the grains were cooking I dug around in the freezer and found the salmon patties. I would have preferred to cook the grains in broth but I was out and used water instead. It was still very good though. 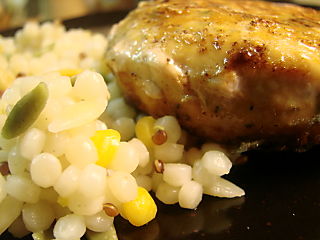 A new staple in my kitchen.

The salmon patties weren't half bad. If I were to criticize them I would say they were a little on the dry side but they are something I'd buy again and have on hand for lazy nights.

Dang, don't know what I did

but I sure screwed up the layout of this blog. It's supposed to be a three column layout, but the right column has somehow ended up at the bottom of the center column.
I'm going through the Troubleshooting steps suggested in the TypePad help. I've already tried a few things they suggested and that hasn't' fixed it yet. I know, when I screw things up I do it good.
I might have to delete and re-create a few posts which means I might loose some comments, not sure how that will work out yet.

Please know that I love hearing from you and treasure what you add to my blog so I am apologizing in advance if some comments get lost in the process.

Off to slay my dragons.

As we were driving through Alpine we noticed the Alpine Inn was under new ownership, kinda hard to miss right? 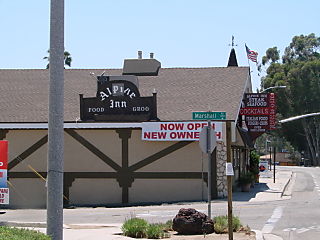