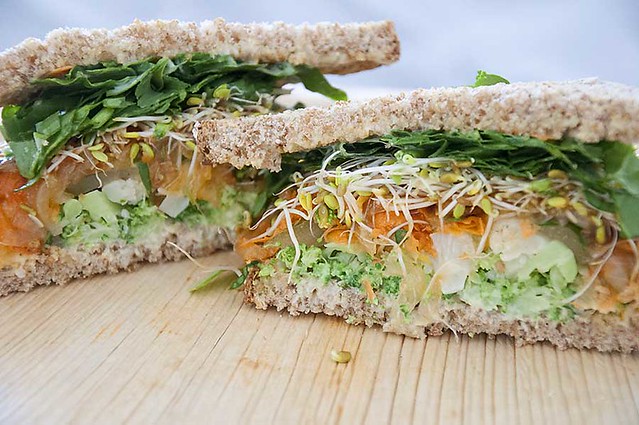 Here's a deliciously wonderful way to get more vegetables in your diet.

I made this sandwich using toasted Ezekiel sprouted grain bread. This is not an endorsement, they don't even know I exist, I just really like the bread. 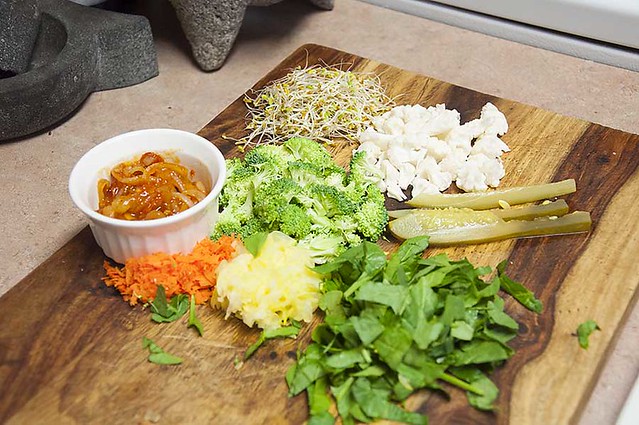 It does take a bit of prep work but it's well worth it. The recipe is for only one sandwich so I recommend at least doubling it because you'll want another one the next day.

The BBQ sauce used with the onion can be store-bought or make this easy peasy one. 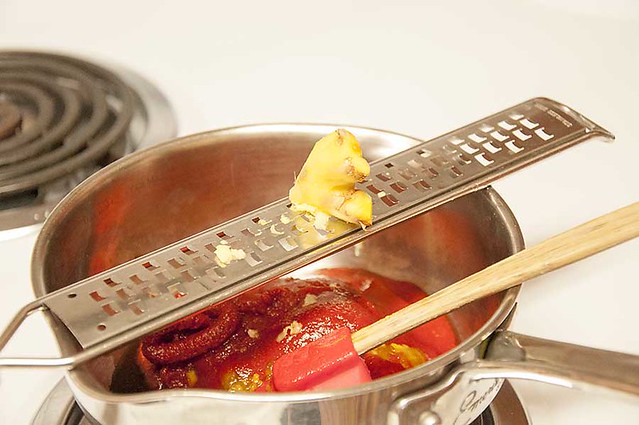 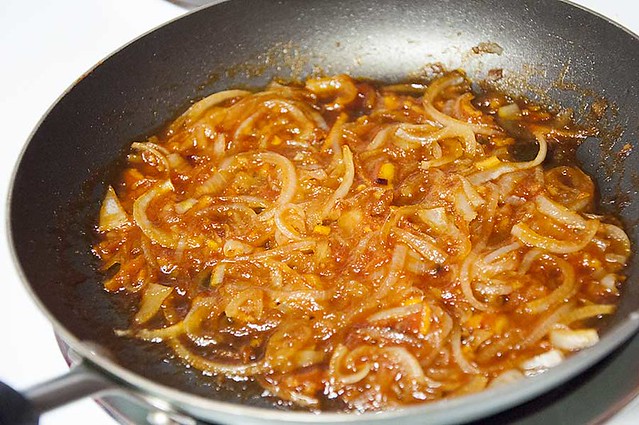 I added more sauce to the onions than the recipe calls for, don't be stingy with it. 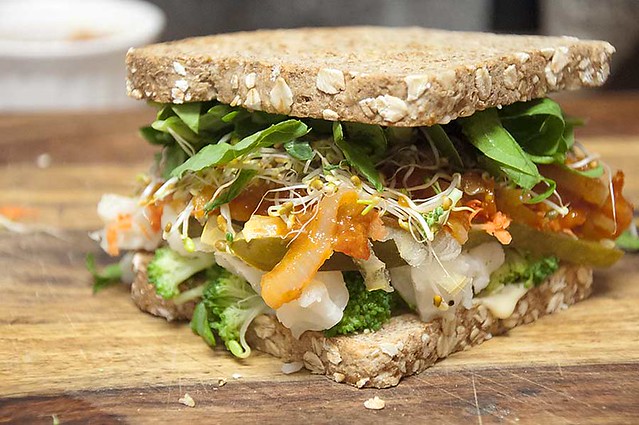 Dang, talk about a mouthful. About now I wished I had a panini press.

Don't skimp on the pickles or the onions, they really make the sandwich great.

The Goodwich is from the Fit For Life book 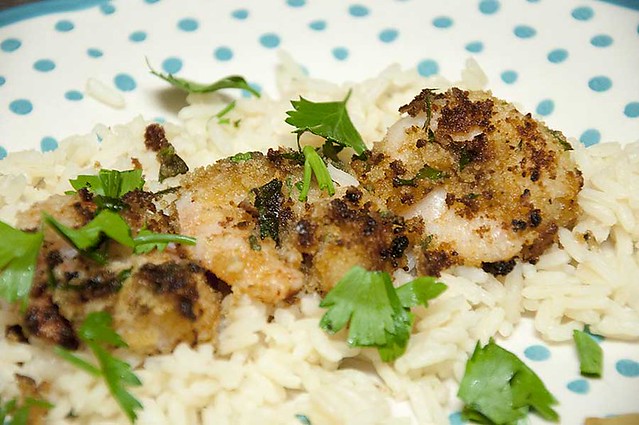 Crunchy on the outside, tender, moist, and sweet on the inside.

I've made this recipe three times in the last month and it was perfectly delicious every time.

It's an easy recipe that has a "wow" factor. It's even great at room temperature so it's perfect for cocktail parties. 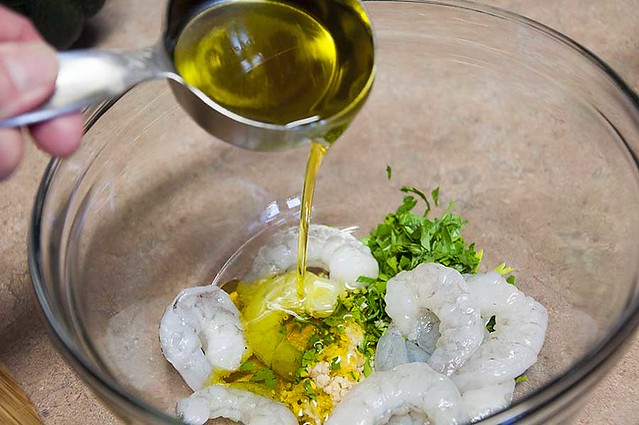 Into a large shallow bowl, add shrimp to chopped garlic, and chopped parsley. Season with salt and pepper then add the olive oil. 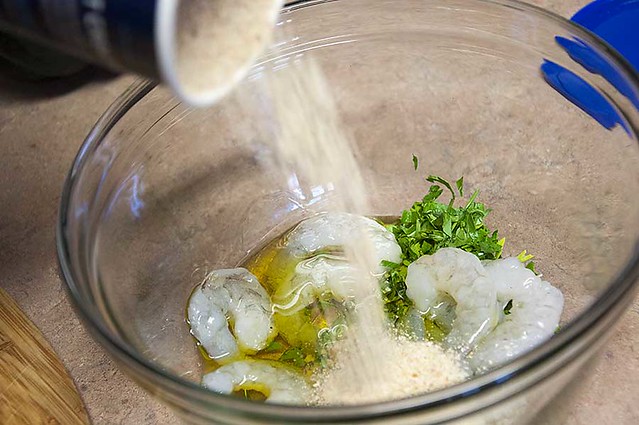 Now you are going to add the bread crumbs a little at a time until the shrimp are lightly coated with the mixture. 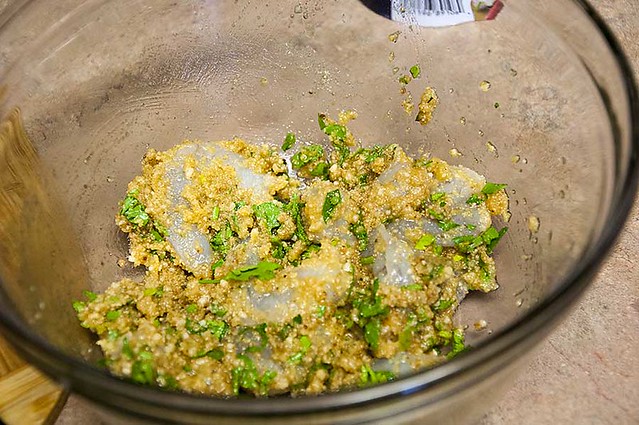 Marinate the shrimp for 30 minutes. 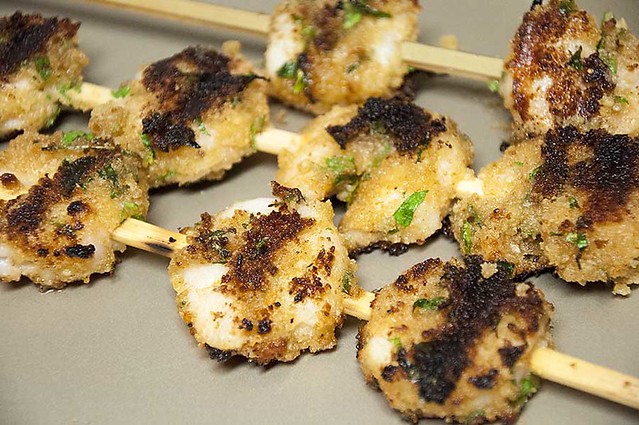 Thread onto skewers and grill for about two minutes on each side.

The recipe calls for extra-large shrimp. I used large shrimp and they were just fine. 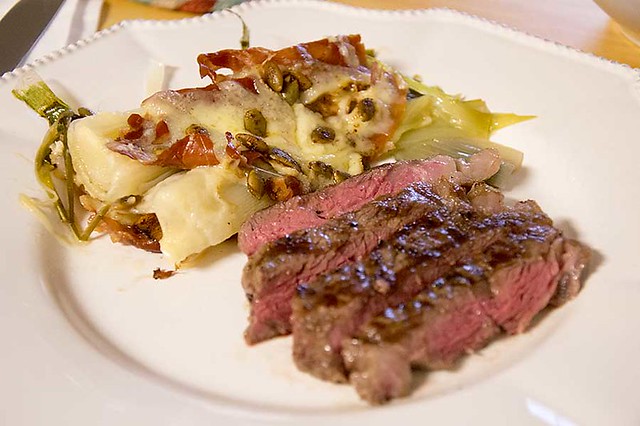 This dish has become one my favorite ways to prepare leeks, well this and grilling,  I don't know if it's the crispy salty Proscuitto, or the ooey gooey gruyere cheese that makes it so irresistible to me. Well, and what wouldn't be good next to a perfectly grilled steak.

It's really not all that involved but tastes like you spent a lot more time making it than you did.

Here, let me show you. 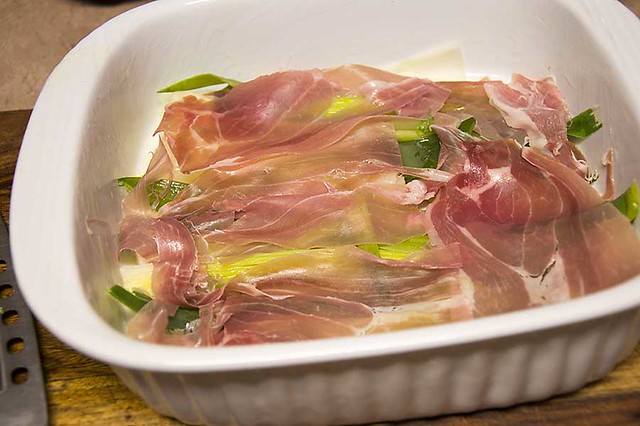 Cut the leeks in half, but only up to the root not through it. Simmer the leeks in water in a large skillet until tender. (I added a bay leaf to the simmering water) Drain the leeks and arrange in the bottom of a buttered baking dish. Tear the prosciutto into shreds and cover the leeks with them. 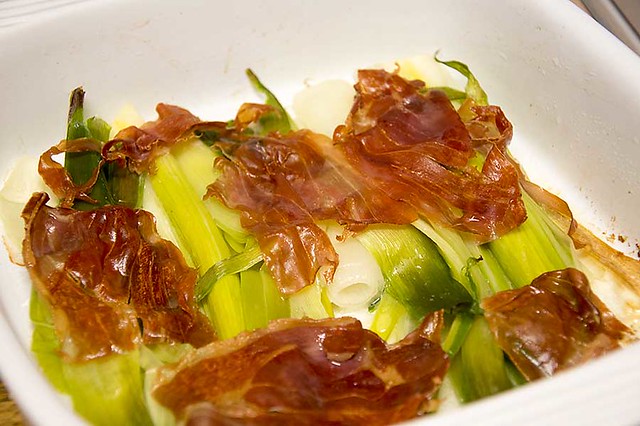 Bake until the prosciutto is crisp. Yes, it does shrink but don't be tempted to use more, I think it would be wayyyy to salty. 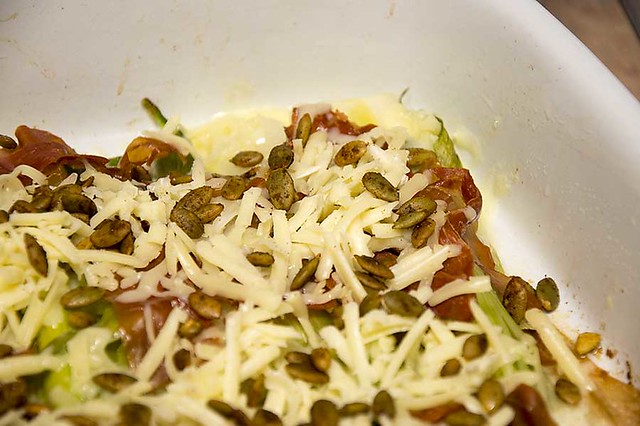 Sprinkle over the leeks the cheese and the nuts. I had spicy pepitas so I used them, not the walnuts the recipe calls for. Now, back into the oven 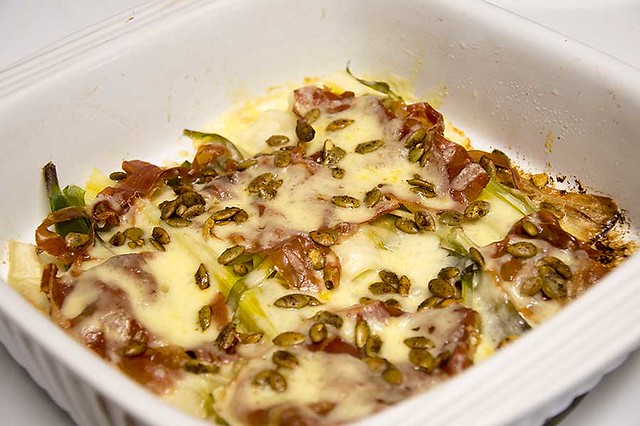 until the cheese is all melty and bubbly.

It's wonderful alongside some grilled meat, but it's also great on its own for lunch.

I used only two leeks and pretty much "eyeballed" the rest.  You'll know how much to use if you are using fewer leeks. 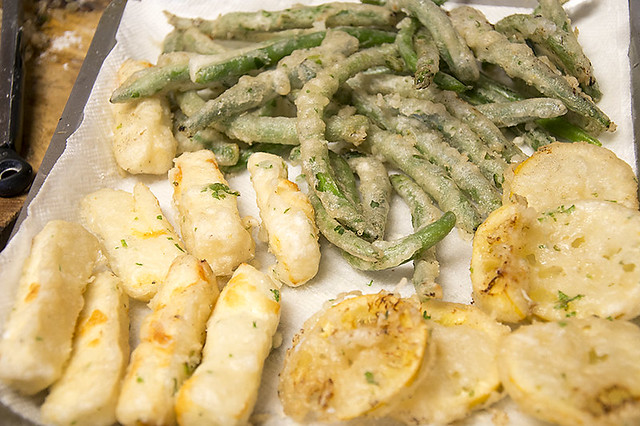 What you'll need to make this delicious Greek staple is, 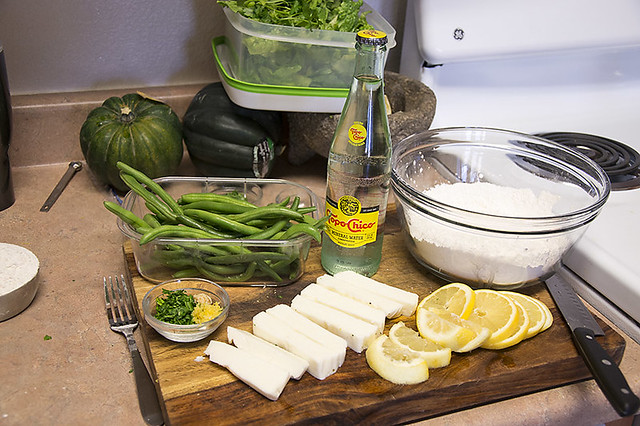 According to the notes in the cookbook, the flat Romano beans are ideal for this but the Blue Lake beans will be fine. The batter is also good for young fava beans, the entire pod, and squash blossoms.

In a large bowl combine the flour, cornstarch salt, and pepper. 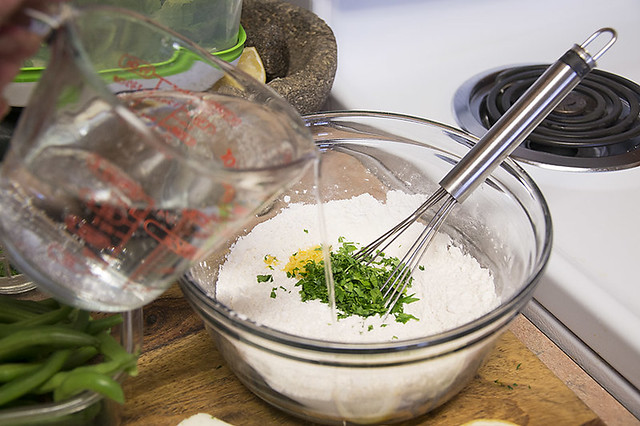 To the flour mixture, add the parsley, lemon zest, and garlic. Add the soda water and olive oil and whisk until most of the lumps are gone.

After a quick toss with flour, the beans, cheese, and lemon are dipped into the batter then, 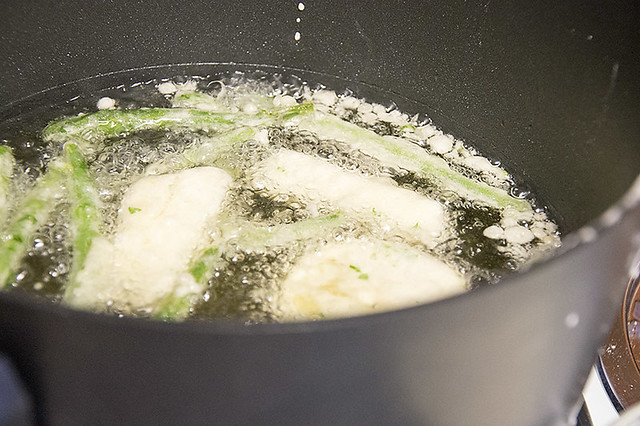 into the 360* spa. It's important to fry a mix of them together, don't fry just the beans or cheese or lemon separately. You'll need the lemon essence imparted into the oil. There was a big improvement in the flavor of the beans that were fried with the lemon slices. Also, I noticed the lemons were a bit sweeter after frying, still tangy but a bit sweeter.

Another reason you should fry a mix of them together is because lemons are so juicy you don't want the water-hot oil reaction, so don't fry them alone, always just one or two with the beans and cheese.

Just for fun Google water-hot oil reaction. I had that happen to me once, and that was one time too many. 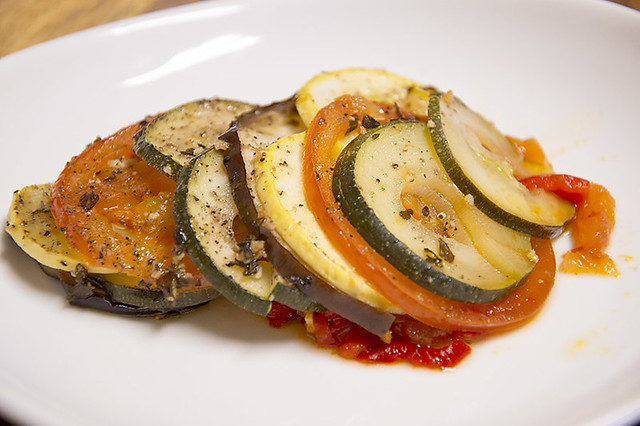 I don't think I could prepare these vegetables any other way and enjoy them as much. 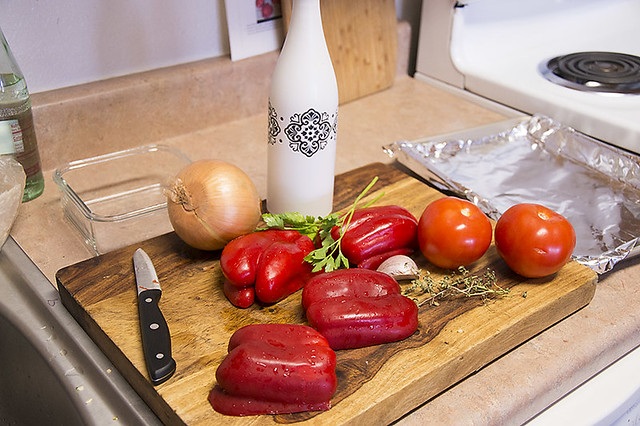 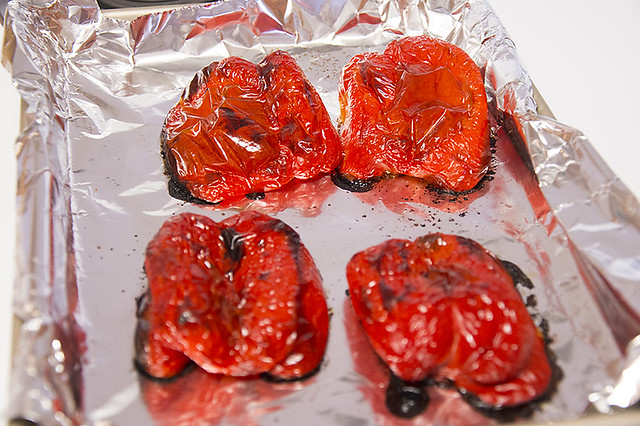 I was tempted to use some of the jarred roasted red bell peppers I have in the cupboard but I'm glad I didn't. These little blackened bits add a lot of flavor. 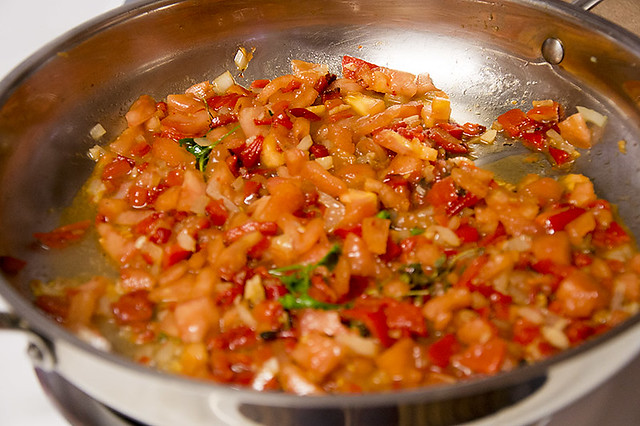 After the onion and garlic are cooked until the onions soften but not brown, add the tomatoes, their juices, and the herbs. After this cooks down a bit add the peppers, salt, and pepper and cook until the peppers soften. Take out the herbs.
My tomatoes weren't very juicy so I had to add a splash of water. Also, don't do what I did and forget to set aside some of the sauce for the vinaigrette. 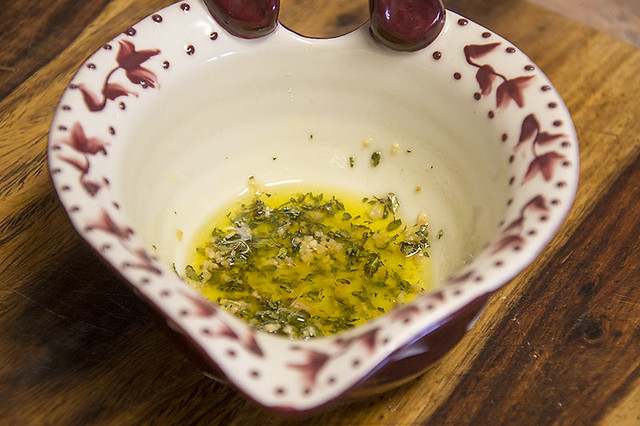 Speaking of which, for the vinaigrette, you'll need olive oil, garlic and I added a pinch of fresh thyme, salt, and pepper.

Now let's get the vegetables ready. 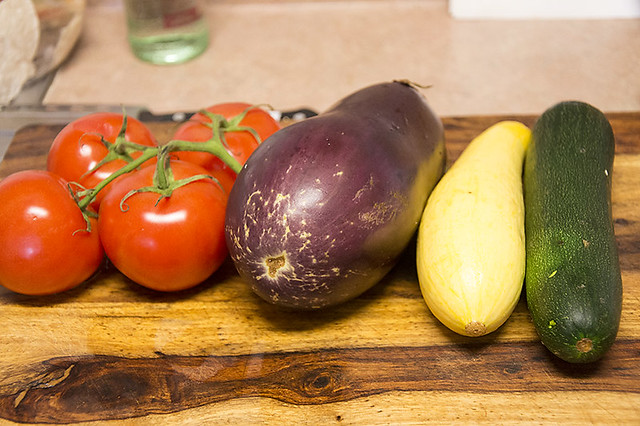 The vegetables needed are tomatoes, Japanese eggplant, yellow squash, and zucchini.  I wasn't going to run all over town looking for Japanese eggplant so I bought the one and only eggplant Smith's had. It was a nice one too. 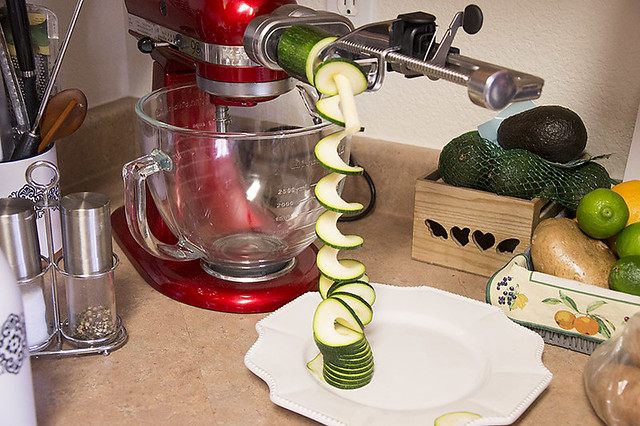 I used the spiralizer for the squash. The one I have slices, peels, and cores. All I had to do was slice down one side of the "slinky" and I had nice even pieces. Easy Peasy 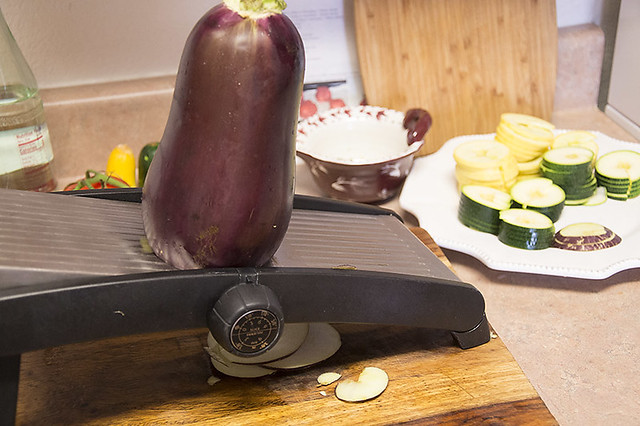 I used the mandoline for the tomatoes and eggplant. Since the eggplant was so big I had to cut the slices in half and that worked just fine. 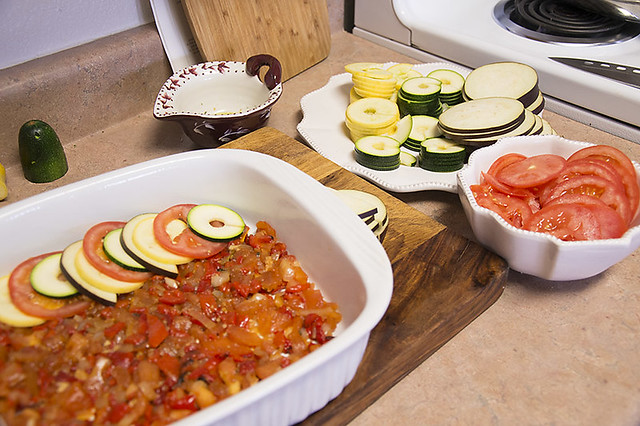 Spread the piperade in the bottom of an 8" square baking dish and arrange alternating slices of the vegetables over it and sprinkle the vinaigrette over the vegetables. Cover tightly with foil and bake 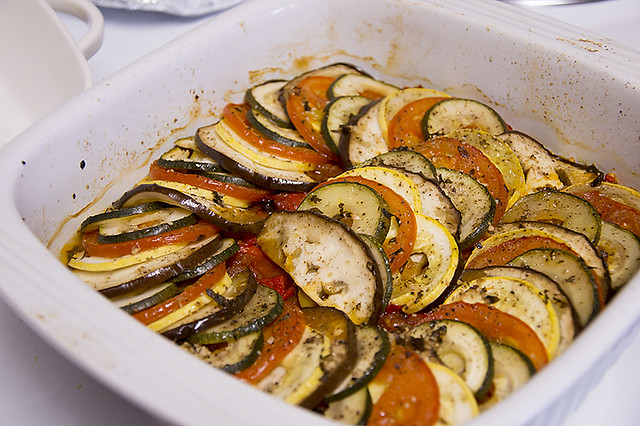 Hot out of the oven and it's as delicious as it looks.

What would I do differently next time you ask?
I would peel the tomatoes for the ratatouille as well as the piperade, and I would peel alternating strips off of the eggplant.
Have you tried peeling a tomato with a potato peeler? It works a charm, you don't have to go through the boiling water routine.

I'm posting the original recipe but I'm also including the other recipe I mainly followed from the blog Just As Delish.

I strongly encourage you to read through both recipes. The main idea is there, just some little differences.