Tamarind from pod to paste

I'm telling you straight up, tamarind "goo" is not photographic in the least.

How I got from here 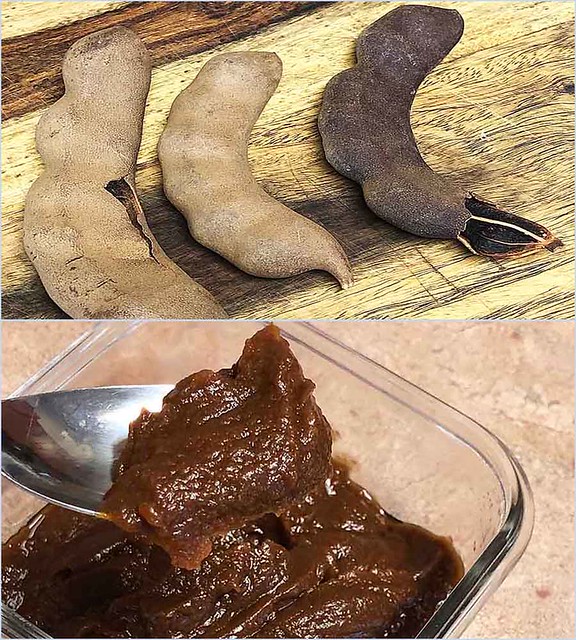 to here in a few, almost painless steps.

This was my first time doing this so I'm far from experienced but I did learn a thing or two. Let's look at the pods. I did learn that the "puffier" the pods the easier the shell comes off, and the darker the pod, the older it is, and will more likely have the shell stick to the pulp, which will be a bear to pick off little piece by little piece. So, light color and puffy get it, light color and not puffy pass, dark color fuggedaboutit!

See those light spots on the peeled pods, that's some of the shell that I couldn't get off the pulp. In the long run, it didn't really matter because it got caught up in the sieve anyway.  Just make sure you get most of the shell and hard stringy veins. 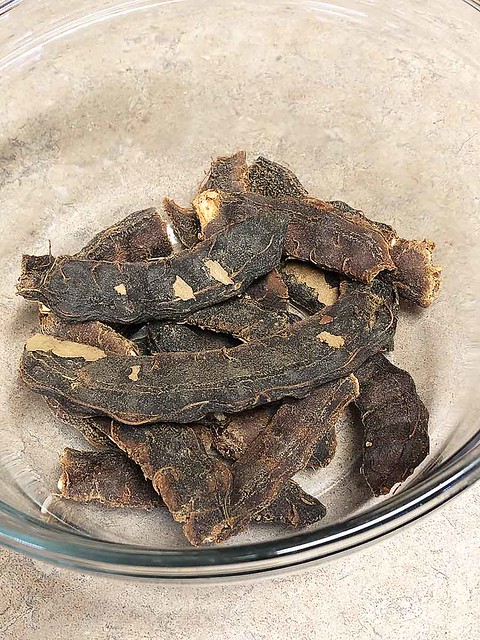 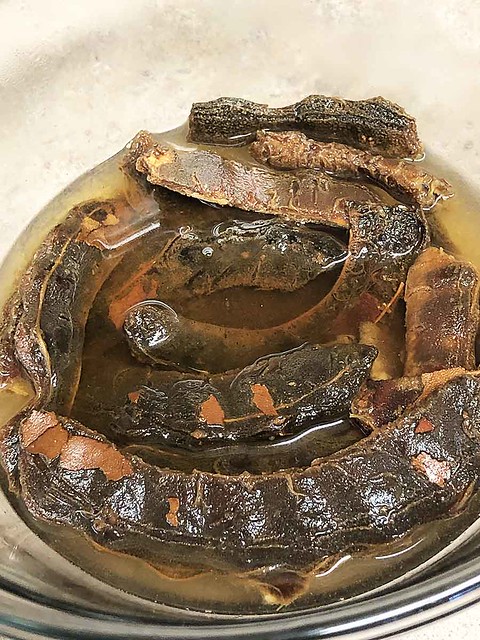 For every ounce of tamarind pods, you'll need an equal amount of hot water to soak them in. They should soak for about 20 to 30 minutes.

Now the real fun begins, get your hand in the bowl and smoosh and massage the pods to help separate the beans from the pulp, 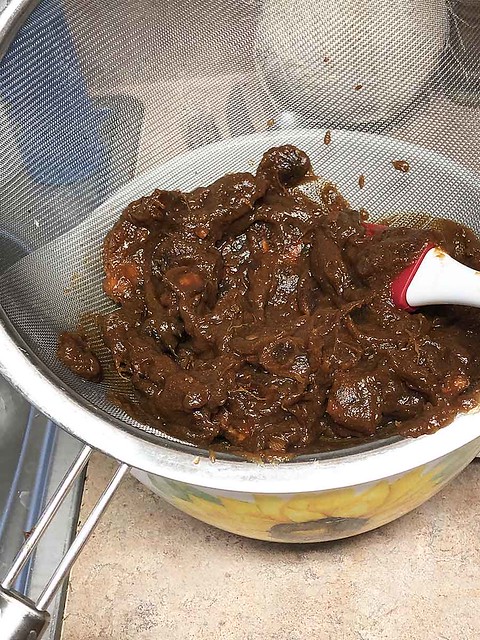 Then dump all the contents of the bowl into a sieve placed over a bowl and continue smooshing and pressing it through the sieve. 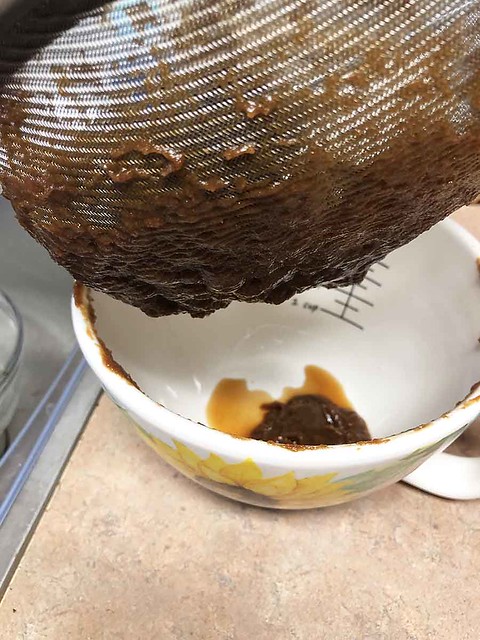 You'll need to occasionally scrape the pulp off the bottom of the sieve. 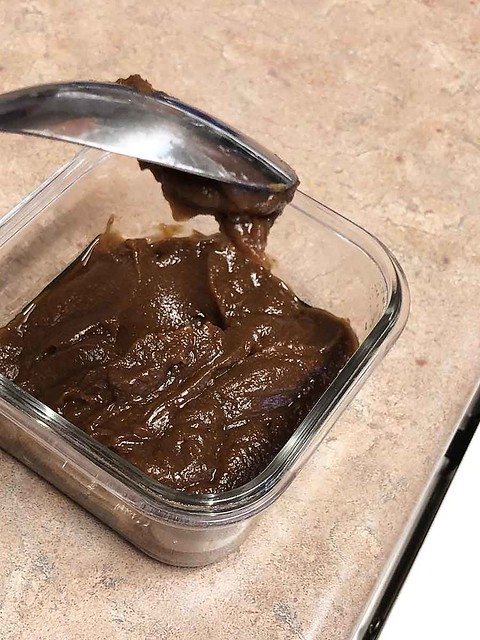 Then you'll end up with a nice thick paste ready for your next culinary adventure.

This will keep for 3 to 4 weeks well covered in the refrigerator or the freezer for months.

Now I'm off to find some recipes using tamarind. I've seen a few that look promising. 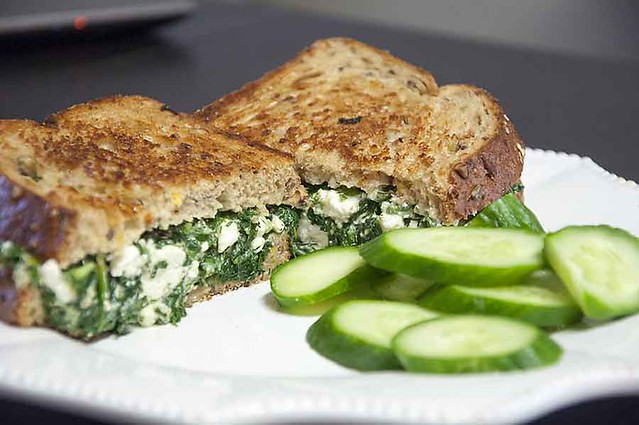 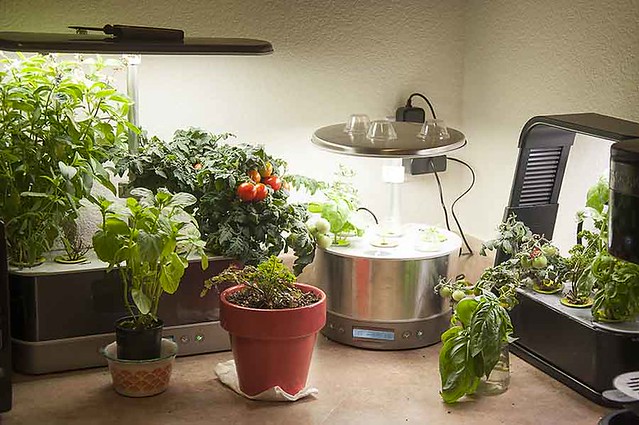 My happy corner of the kitchen and herb source. I used Thai basil, dill, Italian basil, and mint for the spinach mixture. 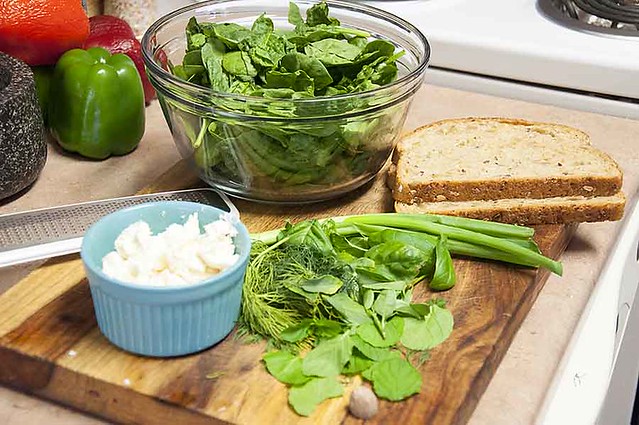 You'll need feta cheese, spinach, scallions, nutmeg, and herbs. I had fresh mozzarella cheese so I added some of that to the feta,
The sandwich will hold together better if you use a good sourdough or multigrain bread. 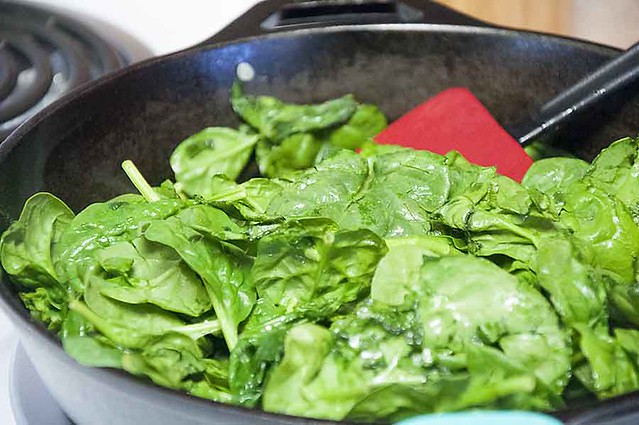 After sautéing the onions, throw in the spinach, just long enough to wilt it.

After draining the spinach chop it up and the herbs. 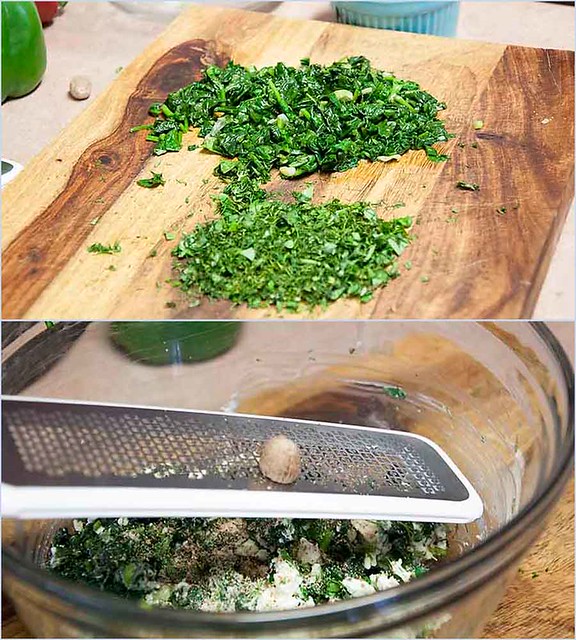 Then mix up the herbs, spinach, and cheese then season with some salt, pepper, and nutmeg. 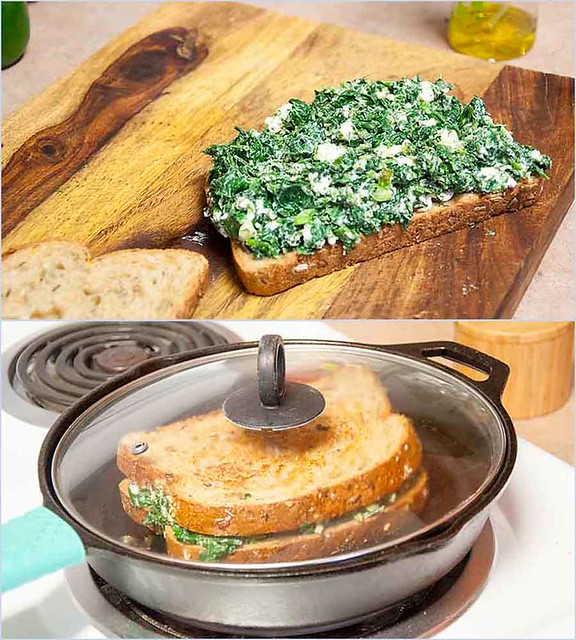 then grilled the sandwich in a cast-iron skillet until golden brown, cover it with a lid to help the cheese melt.

The next time I make this sandwich I plan on adding some garlic to the spinach mixture and some prosciutto.

I hope you make it, it's yummy. 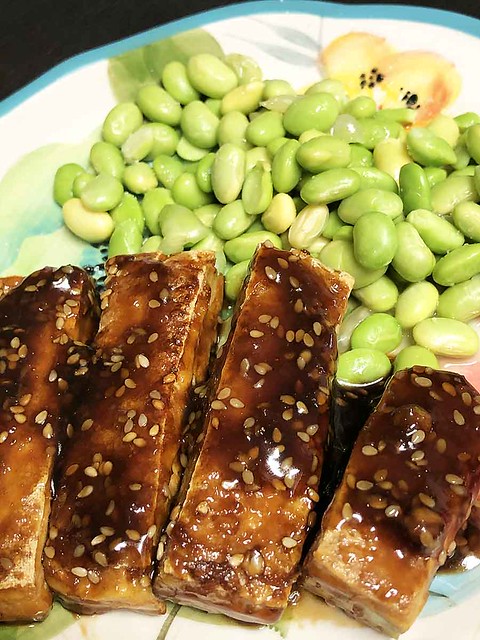 Crispy and a bit sweet, tofu planks are seared then baked with a "Terrific Teriyaki Glaze" and served with buttered edamame.
It didn't hit me until now that other than the tossed green salad it's an all soy meal.

First things first. Slice the tofu into planks and wrap the planks between several layers of paper towels. Put a heavy weight on top of the planks and let the planks drain for at least 10 minutes. I'm trying to reduce my use of disposable products so I used a kitchen towel instead of paper towels and put a cast iron skillet on top. Worked a treat. 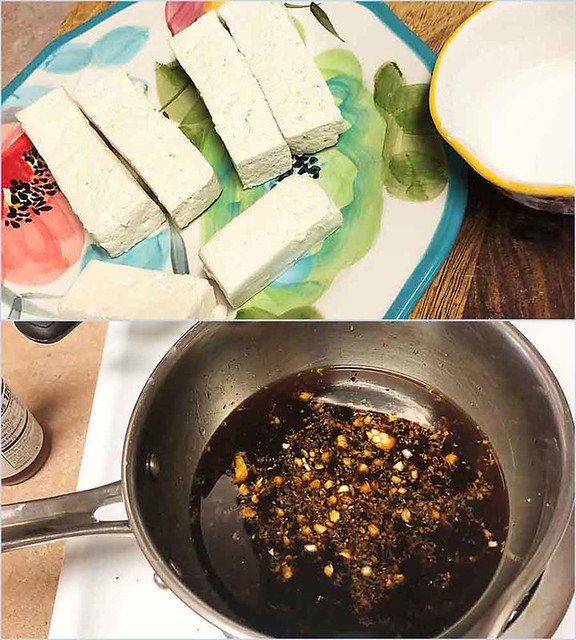 While the tofu is draining, make the "Terrific Teriyaki Sauce," believe me, it is terrific and so simple.
All you need is some soy sauce, sesame oil, mirin, dark brown sugar, garlic, and ginger, sesame seeds optional. Sooo good. 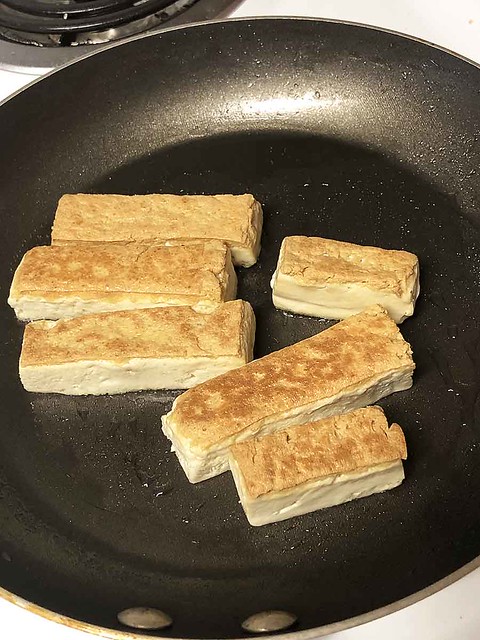 In a skillet sear the tofu until golden brown. 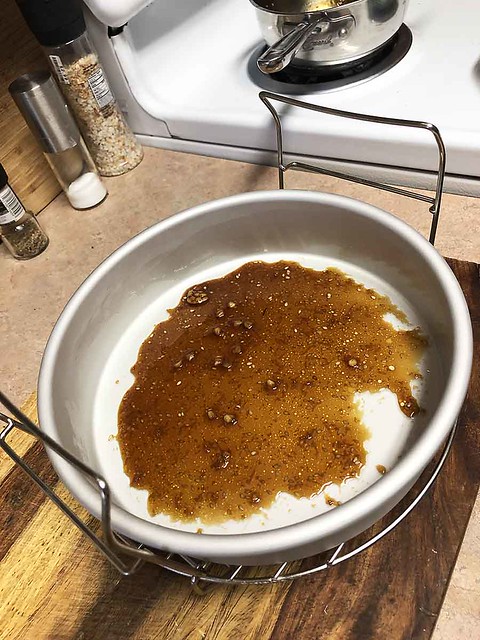 Lightly coat the bottom of a baking dish with a few tablespoons of the glaze.

Add the tofu planks and spoon on some glaze, and bake until golden and bubbly. 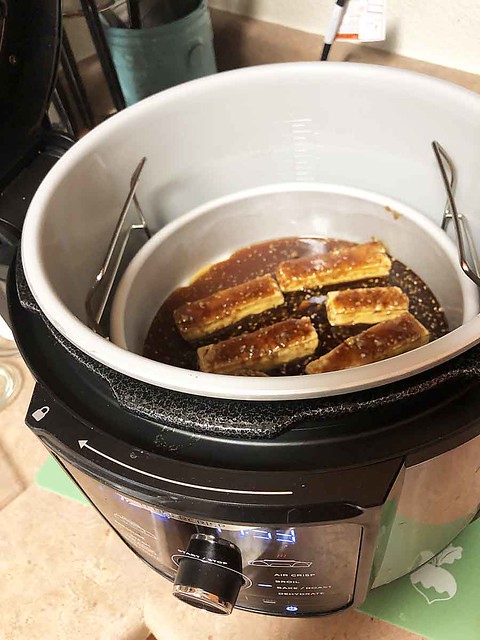 I used the Ninja Foodi on the bake function set to 390*, I first checked it after 5 minutes, then every few minutes after that. All you need to do is get the tofu a bit hotter and the glaze gooey and sticky.

I hope you enjoy it as much as I did.

Delicious, and nutritious too. 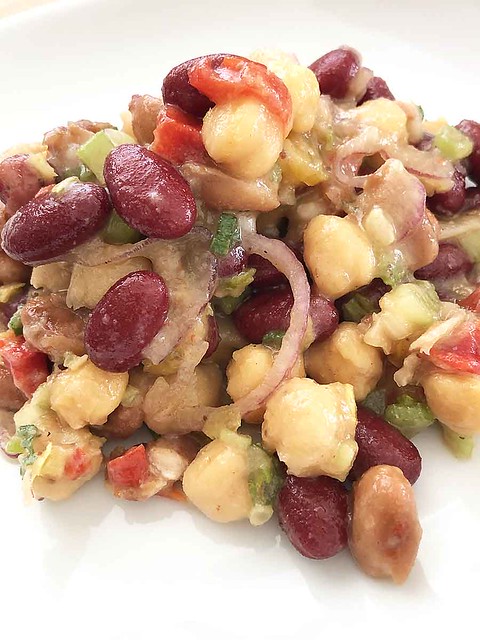 I threw this salad together at the last minute not thinking of blogging it, but I got a lot of requests for the recipe so here we are.

The salad was inspired by a recipe I ran across in the cookbook Bean by Bean which I will post down below.

So, here's what I did, I used what I had on hand.
The beans used were canned garbanzo, canned dark red kidney, and home-cooked pintos.
I added some diced red and yellow bell pepper that had been sautéed in olive oil and garlic the night before, and about 1/4 of red onion, very thinly sliced, and 3 scallions thinly sliced, and of course, the celery and dressing the recipe calls for.
I didn't add all the dressing because I didn't have the green beans and wax beans the recipe calls for and I was afraid it would be a bit much, so I added it bit by bit and tasted it as I went along until I was happy.

Next time I make it, I'm going to make sure I have the green and wax beans because the salad would be even awesome-er

Creamy Brie with a bit of spice, what more could you want in a soup. 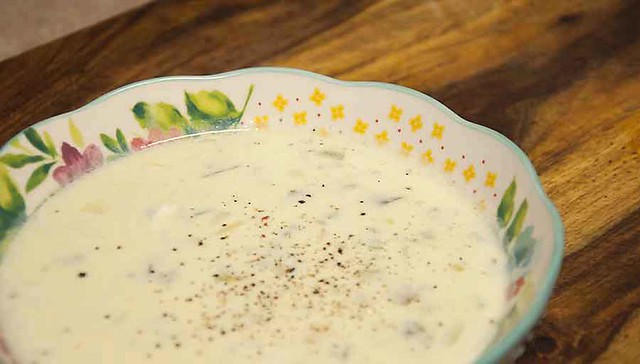 If it says green chile, it's for me.
You can amp up the spice level by using a combination of mild and hot chiles. Make it how you like it.

This is a really quick and easy recipe. You will need, 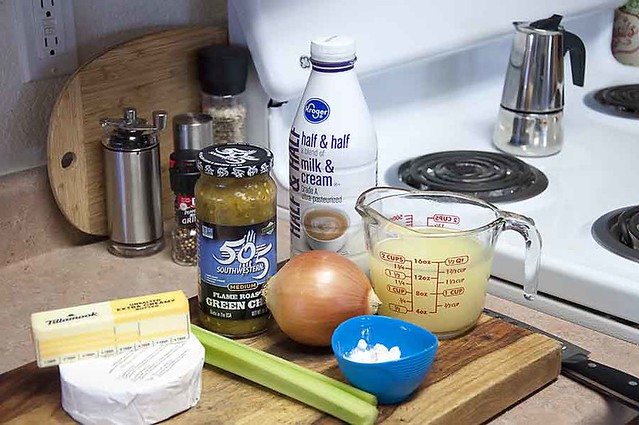 I lightly scraped the white powder off the rind of the cheese but left the rind on. The rind will not totally melt into the soup. I don't think that really matters because the cheese is cut into small dice and you won't have big chunks of rind floating around in the soup. I didn't mind the rind in the soup because you get nice little bursts of extra cheesy flavor. 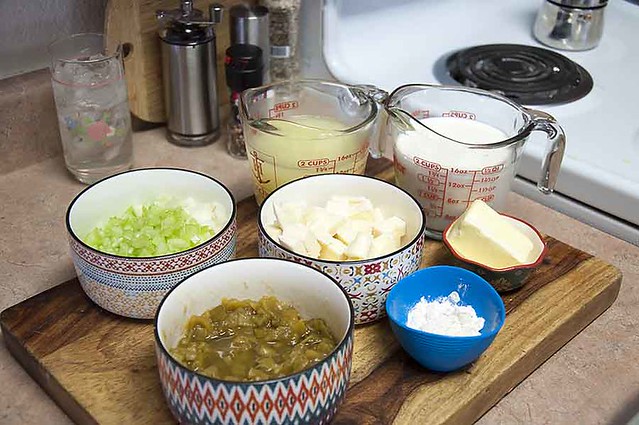 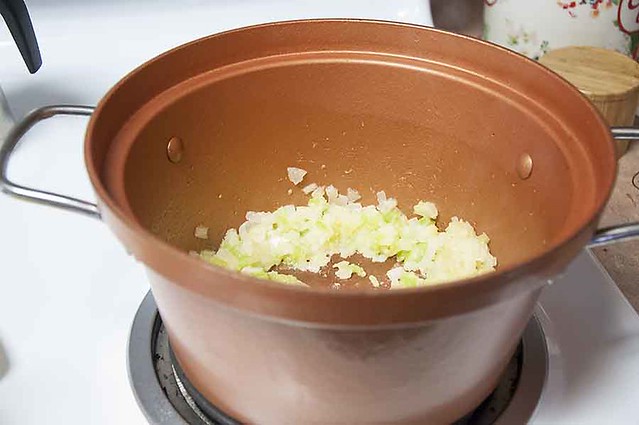 In a large saucepan, add the butter the onion, and celery, sauté until the vegetables are soft. Stir in the flour and cook for a minute more.

Add in the broth and cream whisking until combined. Whisk in the brie until melted, then add the chiles, 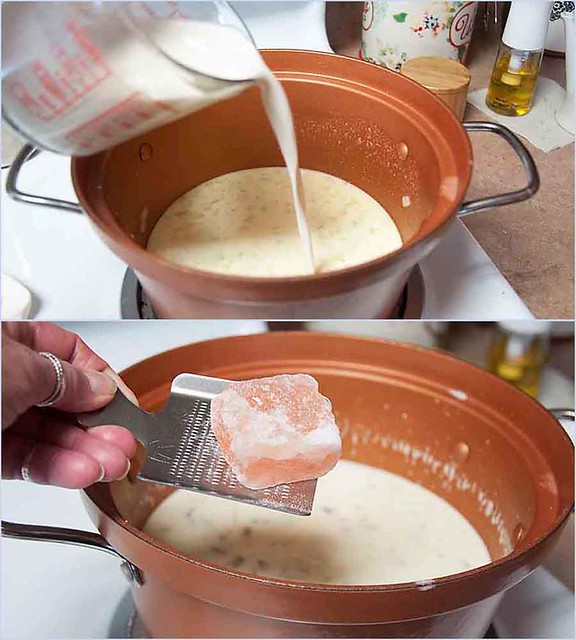 Then salt and pepper to taste.

I've had the Himilayan salt cubes for a long time and just now started using them. I_really_like the grater that came with the cubes, it's super sharp and the back is solid so all the salt stays on the grater until you dump it out, so much easier to keep track of just how much salt you are using.
I know, I'm easily amused.

I'm sure any melting cheese would be good in this soup, but I think the Brie really makes it special.

From such a simple recipe you get such an awesome soup. Yes, the juice was worth the squeeze.